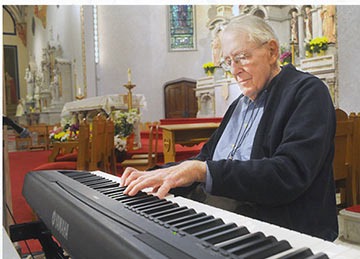 When Robert Chambers was laid to rest in January, in his hands was an Oblate Cross from the Missionary Oblates.  It was an appropriate gesture for a man whose life had been interwoven with the Oblates for 87 years.

“Mister Chambers was truly a pillar of our parish (Holy Angels in Buffalo, New York),” said Fr. John Madigan, O.M.I. who knew Mr. Chambers for more than 60 years.  “He was a gentle soul who was loved by everyone who knew him.”

Mister Chambers will be remembered by Holy Angel parishioners primarily for a musical legacy that stretched more than 100 years.  His mother, Frances, was appointed the church organist in 1912 and a Chambers was the organist at nearly every Mass, funeral, wedding and other parish events through 2017.

“I love the church.  I love the music.  I love the ministry.  It’s a great gift,” said Mr. Chambers in an interview with the Western New York Catholic newspaper in 2017.  “It’s a wonderful place to serve with the Oblates of Mary Immaculate.  I just enjoy every minute of it.  It’s a great opportunity to thank God for the many gifts and graces that we have all received.”

Mister Chambers had a lifelong connection to Holy Angels Parish.  His parents met as members of the parish choir.  As a boy, Mr. Chambers’ musical talents were already being put to use as he played a march on the piano every day as his classmates filed into Holy Angels School.

Frances Chambers ministered as the organist at Holy Angels for 60 years, from 1912 to 1972.  She was named an Honorary Oblate in 1963.  In 1947 Robert Chambers began sharing organist duties with his mom and eventually became the primary organist for the parish.  Mister Chambers has also been honored as an Honorary Oblate and carried the Oblate Cross that had belonged to his mother.

In addition to his long legacy at Holy Angels, Mr. Chambers also influenced generations of young men at Bishop Timon High School in Buffalo.  Mister Chambers started as an English and Latin teacher and eventually served as the school’s principal for 25 years.  In 1978 the students dedicated their yearbook to their Principal with a simple sentence: “No individual has sacrificed more for the Timon community than Mr. Robert H. Chambers.”

After  Mr. Chambers’ death, he was remembered on the school’s Facebook page for “creating a climate where each of us, student and teacher, could work to our maximum capabilities.  He had time for everyone – a senior student officer, a bewildered freshman, an irate faculty member, an anxious parent, a clerical worker or a visiting alumnus.  He was an unending example of a gentleman.”

Upon retiring from Bishop Timon High School, Mr. Chambers devoted most of his time to Holy Angels Parish.  In addition to his music ministry, he also served as a pastoral associate and was involved in nearly every aspect of parish life.

Mister Chambers saw serving the Church as a calling.  He said he enjoyed every day that he spent at Holy Angels because it was a chance to work with the Oblates and to minister to the people of the parish.

“The Oblates are a wonderful congregation,” said Mr. Chambers.  “They gave me an opportunity to serve the Lord and to answer His call.”