At the age of 98, Fr. Clarence Zachman, O.M.I. is the oldest Missionary Oblate in the United States.  But you wouldn’t know it by his actions.  He is always quick with a word of encouragement or advice.  He doesn’t need a cane, walker or wheelchair to get around, and he still drives.

Recently Fr. Clarence reached a milestone that only a handful of men have reached before – 70 years as a Missionary Oblate priest.  In September he celebrated his anniversary at a special Mass held for Oblate jubilarians at the National Shrine of Our Lady of the Snows.  Father Clarence was one of the first to arrive, one of the last to leave and had no problem driving himself to and from the event.

“I am so grateful to the Lord for allowing me to have so many joyous years of ministry, and being able to become friends with many wonderful people,” said Fr. Clarence.  “What keeps me young is that I am always looking to improve my personal relationship with God – even as a 98-year-old priest.” 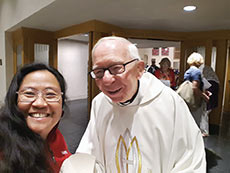 Father Clarence was ordained in 1948 and spent most of his early years as an Oblate teaching at Our Lady of the Ozarks College until 1961.  He then joined the United States Air Force as a Military Chaplain, and for the next 20 years was stationed in countries all over the world.

“As Oblates we are called to serve the poorest of the poor,” said Fr. Clarence.  “As an Air Force chaplain, I met many people who needed help, especially during wartime.  I was honored to serve people serving our country.”

Father Clarence retired from the Air Force in 1981 and then ministered at the National Shrine of Our Lady of the Snows.  Today he can still be found many days at the Shrine – talking, counseling and praying with pilgrims.

Here Fr. Clarence reflects on his 70-year journey as a Missionary Oblate priest:

My vocation came first from God.  Then it came from my parents who were a sign that God is love.  They had eight children.  The three girls became Franciscan Sisters and two of the boys became Oblates of Mary Immaculate.

I attended grade school at an Oblate parish.  It was at First Communion that I asked Jesus what He wanted me to do when I got big.  He responded, “Be a priest.”  I thought I was not smart enough to do so.  But Jesus answered that He would take care of me.  I think Jesus must have told my teachers to pass me so that they wouldn’t have to deal with me for another year.

I was ordained in 1948 and ministered at parishes and schools throughout the Midwest.  Sometimes I was fearful, but Jesus was always there reminding me not to worry.  He would help me.  He would never let me down.  In 1961 I joined the Air Force as a military chaplain.  I was 41 years old, two years past the maximum age limit.  It took an Act of Congress for me to join.  My ministry over the next 20 years was one of love – a love for the service men and women, and for their families.  I enjoyed every day of my work.

I retired from the Air Force in 1981 and came to the National Shrine of Our Lady of the Snows.  I helped out wherever I was needed.  I would tell the pilgrims that God wants me to give them a message – that God loves you.  That is the Good News.  Eventually I developed the habit of telling people a simple message, “God loves you and so do I.”  I’m sure I’ve repeated this phrase tens of thousands of times.  It’s such a simple but vitally important message to be reminded of.

During my retirement God has always had a plan for me.  And I know that He will continue to have a plan for me for as long as I live.  It’s simple, just let God be God, because God is love.  I am always being reminded of His love.  God has taken care of me every single day, and He will do so for every day to come.