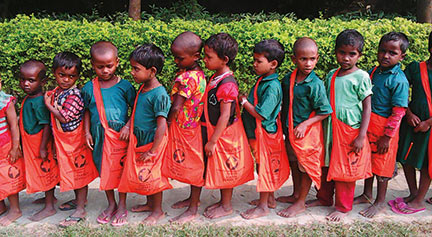 Chittagong Hill Tracts covers three districts in Bangladesh (Rangamati, Khakrachory and Bandarban).  Most of these areas are mountainous.  There are 13 indigenous tribes and Bengali people who live in the Chittagong Hill Tracts.  The Oblates are working in two parishes there, Lama and Alikodom.  I am working at Alikodom Parish as an assistant priest.

Being a Khasi, an indigenous Oblate priest myself, it is always a privilege for me to share my experiences of working in the Chittagong Hill Tracts.  We have 12 villages in Alikodom Parish, which falls under the government reserved forest area controlled by the army.  These villages are in very remote areas without good communications, schools, pure drinking water and basic healthcare.  The only way to reach the people is to go on foot and in a few areas by boat.

This year during Holy Week and Easter I had the privilege of visiting 11 Tripura villages over 12 days.  Since the area is restricted due to government regulations, I needed permission from the army, and after waiting three years I thank God I finally got permission to have a pastoral visit and give the people a chance to celebrate the Holy Mass.

The village where I had my Easter Mass was the first one they ever had.  It was touching to see people’s thirst for the Eucharist and their anticipation of participating in an Easter service.  They were waiting to meet and talk with me, and it was so interesting to see the genuine faith of these humble people.  Many of them did not know the traditional prayers and rituals of the Church.  But their enthusiasm in expressing their faith really enhanced my faith as a priest.  I admired their faith and trust in the Lord.

This was my first time as a priest being away from the comfort of the parish.  In the villages, there were no toilets, bathrooms, personal rooms or purified drinking water.  I just followed the way people did things.  Having to go to the bathroom in the jungle, taking a bath in the Jhiry (a small river), sleeping in a common room with them and drinking the water of the river gave me great missionary experiences.

I walked for 35 hours over 12 days, including one day where I walked for nine hours straight.  At night I was tired but went to bed late as I listened to people’s stories of their life struggles in the hills.  I received much strength from the people.  After all, if they could stay and thrive in this place, why couldn’t I?

It was really a missionary journey, an adventurous one shared with simple indigenous people.  Their cordiality and concern for me made my visit a pleasant and enriching experience.  The faces of children are still imprinted on my heart.  I was sad to see so many children unable to attend school because most villages had none.  Even though my heart was willing “the purse was weak.”  We could not address their basic educational needs because of the lack of funds.

I listened attentively about their financial struggles; not getting just prices for their products in the market, the cry over ownership of their land and whether in the near future they would be able to keep and use the lands they now possess.  I also heard how their movements are restricted by the army, their stories of injustice, done to them by the mainstream majority ethnic group (Bengalis), and sometimes by their own people; the political games in the hills.  All this made my heart cry.

I know I cannot address all of these harsh realities, but I am sure that as an Oblate of my presence, listening to them and visiting with them, gave them some moral support.  It made me feel proud to be one of them.  This Easter was special for me, as I saw the risen Lord in the faces of these people, and a new hope dawning in their hearts as they felt perhaps at least one person showed them empathy, and through me the whole Oblate world.  Truly Christ has come to redeem all human beings.  My presence with them gave me and them that assurance.  I thank the Lord for giving me this most enriching Easter experience.