As one of his former patients simply stated, “Fr. Maurice is an excellent man, who serves God and humanity at the same time.”

Father Maurice was born in Saskatchewan, Canada and ordained an Oblate priest in 1962.  For a few years he taught high school students but he never felt being a teacher was his ultimate calling.  He dreamed of becoming a medical missionary like his hero Albert Schweitzer, and was eventually accepted into the medical program at the University of Ottawa. 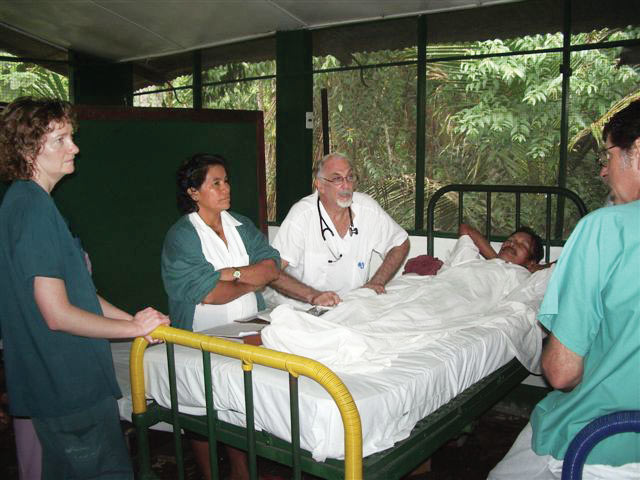 After earning his medical degree, the Oblates sent Fr. Maurice to work in Acayacu in the jungles of Peru.  But he had to leave after a few years because of fear for his safety, as the region was controlled by militant guerillas.  After a time studying tropical medicine in Belgium, Fr. Maurice worked in Haiti developing a program for the treatment of leprosy.

He returned to Peru and teamed with another priest-doctor, Fr. Jack MacCarthy, a Norbertine priest.  Together they ministered to the poor in the jungle, taking responsibility in 1986 for a medical clinic in Santa Clotilde that serves people in more than 100 villages along the Napo River.

In addition to the main facility, more than a dozen outreach health posts were established by Fr. Maurice and Fr. Jack in isolated villages along the Nap River.  These outposts are staffed by a nurse or healthcare worker.

“All day you are reacting to new situations,” said Fr. Maurice.  “After my hospital rounds in the morning I could have as many as 80 patients to see in a day.”

In recent years, the two priest-physicians at Santa Clotilde began working on a transitional phase, putting a plan in place to focus less on them and more on having a network of doctors rotating into Santa Clotilde to keep the hospital and clinic operating at full capacity.  Recently, at the age of 80 and after more than 30 years as a jungle doctor, Fr. Maurice decided that the clinic was in good hands and he could retire and return to Canada.

Reflecting on his healing ministry, Fr. Maurice is reminded of the words of his hero, Albert Schweitzer:  “A man can do only what he can do.  But if he does that each day he can sleep well at night and do it again the next day.”

Father Maurice, the good doctor, has no problem sleeping well at night.