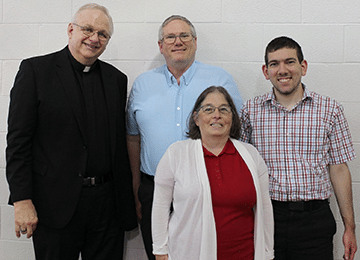 Chris Streetman’s current home is the National Shrine of Our Lady of the Snows.  When he arrived last summer as an Oblate novice, it truly was like coming back home.

“I grew up in Breese, Illinois which is about a half-hour drive from the Shrine,” said Chris.  “My mom has always loved the Shrine and would find any excuse for us to go there.  As a child, I visited the Shrine many times, including events like the Way of Lights and various cultural programs.”

Faith has always been important to the Streetman family.  When Chris was born, he had numerous health problems and doctors didn’t expect him to live past his first birthday.  His parents prayed daily for their young son – and he survived.

When Chris was young, his family moved from Texas to Illinois.  Mom discovered the Shrine and it became a frequent destination for the family.  Chris was particularly drawn to the Shrine and the Missionary Oblates.

“When Chris was eight years old he told me that he wanted to be a priest,” said Chris’ mom, Monica.  “I’m sure those visits to the Shrine had a lot to do with that decision.”

After high school, Chris spent a couple of years exploring a variety of career options.  He earned a degree in English Literature/Writing from McKendree University.  He also worked for a couple of years in the retail and food service industry.  But the calling to religious life was always present.

“I was involved in TEC (Teens Encounter Christ) and Quest retreat programs and it was at one of these retreats that I heard the call to religious life,” said Chris.  “I attended the diocesan seminary for a year before I realized that my calling was to become a Missionary Oblate, the people who had helped to foster my faith at the Shrine throughout my childhood.”

Chris attended the Oblates’ pre-novitiate program in Buffalo, New York before beginning his novitiate year last August at the Shrine.  The novitiate year is a time to get away and to deeply discern through prayer and study if one wants to commit to a life as a Missionary Oblate.  At the end of the novitiate year, the seminarian makes first vows.

Today, Chris is just down the road from his family, but he hasn’t seen his parents for more than seven months.  Mom hasn’t even been to the Shrine since she dropped Chris off.  She loves her son and the Shrine too much to visit.

“It’s hard on me not seeing him,” said Monica.  “But I have to let him be, because he needs to be with his Oblate family now.”