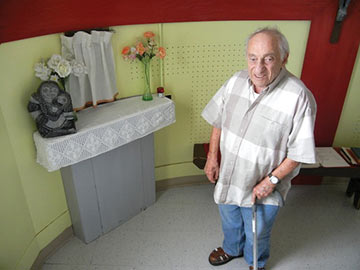 Father Jules Dion, O.M.I. was a longtime missionary in the far north of the Canadian Arctic.  He spent decades braving severe weather to serve mostly Native people, and was a strong advocate on local environmental issues.  Father Dion passed away on Christmas Day at the age of 89.  This article was written by Jane George and appeared on Nunatsiaq Online.

Father Dion arrived in Quaqtaq on Nunavik’s Ungava Bay in July 1955, as a newly-ordained Oblate missionary.

He wanted to go to Canada’s Arctic as a missionary even at a young age, and, at 19, entered an Oblate seminary.  Ordained as a priest on April 25, 1954, he landed in Quaqtaq a little more than a year later.

“I arrived in Quaqtaq in July 1955, from Belgium, and stayed there for ten years,” he told Nunatsiaq News in 1999. 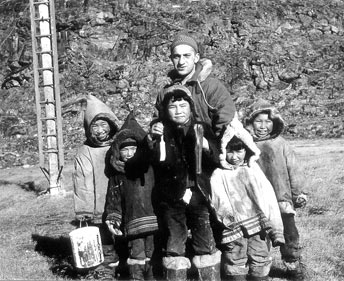 “At that time, there was just the mission, one building and most people were living out along the coast.  Only at Christmastime would everyone come into Quaqtaq.”

Families arrived by dog team and built individual igloos by the mission, in time for celebrations that began in earnest on December 24, Dion said.

“Everyone would be wearing their beautiful new clothes, made for Christmas,” he said.  “And we would then begin the games, competitions and dog-team races.  One relay involved bringing blocks of ice that we’d cut to use for water during the winter down from the lake to the mission.  As well as being a race, it was a service.”

On December 24, Dion always presided at the Midnight Mass, and afterwards everyone shared tea, biscuits and candy.  Around the time of December’s first full moon, an Army plane would make a parachute drop of mail and gifts over Quaqtaq.

“But sometimes the parachute wouldn’t open and the basket would split open on the rocks and the presents would get all battered.  Once we received a fruit cake, but its tin was crushed, and all the beads that the women were to use for decorating their clothes ended up in the fruit cake.  So, we finally cut up what was left of the cake into small pieces, and when all the older men and women came over to the mission to play cards, we munched on the pieces of the cake and in this way, we managed to recover the beads,” he said.

There were also toys for the children, collected by the Army and shipped up by boat in the summer, which Fr. Dion would wrap for distribution at Christmas.

Although these early holidays held many good memories for Fr. Dion, there were also hard moments, reflecting the difficult realities of life in Nunavik during the 1950s and 1960s.

Once, Fr. Dion recalled, a man traveling to the Christmas festivities stopped to feed his dogs from a meat cache – but the hungry dogs ran off, leaving him to walk alone to Quaqtaq for hours in stormy weather.

He arrived with frozen feet but managed to keep some of his toes, thanks to injections of penicillin and an evacuation south later on, in mid-January.

“There were no nurses.  Nothing.  In fact, the nearest doctor was in Pangnirtung, and we would consult on the radio,” Dion said.

In 2015 Fr. Dion left the North due to declining health and moved into the Oblate residence in Richelieu.  He remained connected to the North through the power of prayer.

“I was so happy to be with the Inuit,” he said in his book, Fifty Years Below Zero, which tells the story of Fr. Dion’s long and deep connection with Nunavik.  “These many years of life in the North have made me happy because this fulfilled my deepest desire, which was to go and live with the Inuit.  I have never regretted asking to come among them.  I was well prepared, ready for everything and nothing surprised me.  If I was to redo everything all over, I would make the same choice.”