This month, Fr. David Uribe, O.M.I. celebrates his 6th Anniversary as an Oblate priest.  Read his inspiring vocation story below: “I am originally from Seminole, Texas which is a small town of about 6,000 people in the western part of the state.  My father worked many years in the oil fields.  I am the middle child, with one older sister and one younger sister.  Inside the home we spoke Spanish and outside of the home we spoke English.  At about the age of eight I became an altar server and that was when the seed was planted in me that the priesthood might be something that would become a part of my life.

“At the age of 13 I met my first Missionary Oblate, Fr. James Delaney, O.M.I.  He was the priest that had married my parents 22 years earlier.  He was an elderly Irish man who had come to the United States immediately after his ordination and settled in Texas.  Upon being introduced to him he asked me what would I like to be when I grow up?  I told him I didn’t know, and I wanted to end the sentence there.  But something from inside told me to share with him that my mother and grandmother wanted me to be a priest.  From that moment, Fr. Delaney took me under his wings. 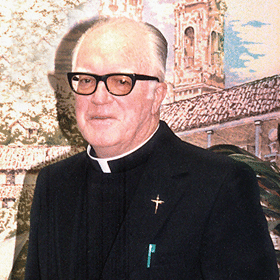 “Father Delaney told me many stories about the Missionary Oblates and their missions.  Eight months later I was on my way to the Oblates’ St. Anthony Minor Seminary in San Antonio. I said good-bye to my family at the age of 14 and traveled 300 miles away from home and became a high school student of the Oblates.

“I thoroughly enjoyed my four years there, in particular hearing the stories from the visiting Oblates who came by the school.  It was powerful.  I graduated from the minor seminary and went into formation for the priesthood.  I was there two years and then realized I really didn’t know what God was calling me to do, and I didn’t really know who I was.  So at the age of 21 I exited formation and closed the door to the Oblates and my faith.

“I went through college and began a career in higher education.  I was successful, but living aimlessly.  Nine years later, I thought maybe I needed a career change, so I looked at entering politics.  While considering that change I received an invitation to attend Mass from Fr. Richard Hall, O.M.I. the new Vicar at the Oblate parish in town.  It was exactly what I needed at that time.

“In October 2004, I walked into the church and immediately something inside of me woke up.  When it came to the Gloria it was a version I hadn’t heard since I was in high school.  It was like a homecoming.  As I began to sing I got very emotional because I realized that it was God who was missing from my life.  I broke down and cried.

“I composed myself until the Gospel.  Of all the Sundays I could have gone back to Mass, the Gospel that day was about the Prodigal Son.  I knew that I was that Prodigal Son that had left for years and was now returning.  God was embracing me, and I probably wept the rest of the Mass.

“My conversion had begun, and I applied to join the Oblates again.  Seven years of formation led me to the day of my perpetual vows as a Missionary Oblate.  I was ordained in May of 2014.  The Oblate tradition is to receive an Oblate Cross that had belonged to a previous Oblate.  When I was asked whose cross I wanted, it was a no-brainer.  I wanted the Oblate Cross of Fr. Delaney — my friend, mentor and hero.

“Father Delaney had passed away in 2007 at the age of 97, after 70 years as a priest.  Today, as I hold our Oblate Cross, I think back to him handing it to me when I was a boy, and his prophetic words that one day his cross might be mine.  Through that cross, he is still with me every day.”