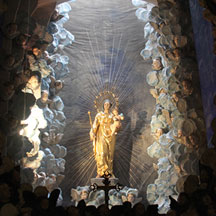 The Missionary Oblates are caretakers of a shrine in France where inspiration and healing have taken place since the Middle Ages.

The Shrine of Notre Dame De Lumiéres (Our Lady of Lights) is about 50 miles north of Aix-en-Provence, the birthplace of the Missionary Oblates.  In 1819, the Oblates arrived at the shrine and have welcomed millions of pilgrims over the years to one of southern France’s most popular devotional sites.

The Shrine is located in the village of Goult and Christian devotion there dates back to the fourth century when a chapel was dedicated to Our Lady.  The Cassian hermits who had their hermitages in the surrounding valleys used to assemble in the chapel to pray.

The chapel was abandoned and almost entirely destroyed as a result of the wars on religion in the 16th century.  In August of 1661, a miracle took place at the site which brought numerous pilgrims to Goult.

Antoine de Nantes, a 63-year-old farmer, had been a hardworking stonemason until he suffered a large hernia and was forced to wear a heavy iron corset.  He could barely walk but one day dragged himself to the vicinity of the venerated ruins.

Suddenly, he saw a great light and in the midst of that light the most beautiful child one could imagine.  Antoine reached out his arms but the vision disappeared.  At that very moment, he was cured of his hernia.  As a sign of appreciation toward the Blessed Virgin, the Christian people rebuilt the ancient chapel from its ruins.

Pilgrims came in crowds and many people reported healings after praying at the church.  During the French Revolution, the Carmelites who were responsible for the church were forced to leave, and the property was sold to the Lord of Goult.  Eventually the church was restored to a place of worship and in 1837 the Oblates purchased the property.

After a few years of making repairs to the run-down property, the Oblates reignited devotion to Notre Dame de Lumiéres by ministering to the faithful who came to the holy place from all parts of southern France and beyond.

The annual number of pilgrims generally hovered around 50,000 with most coming in groups from parishes and schools.  A few thousand came every year for feasts of the Blessed Virgin celebrated August 15 and September 8.  More than 20,000 pilgrims were present at the feast of the crowning of the Virgin on July 30, 1864.

A special characteristic of these pilgrimages was that the main events took place at night, recalling the lights which were the original attraction for the flood of pilgrims.  There were torch-light processions, sermons, confession, open-air Masses, etc.

Notre Dame de Lumiéres also became an Oblate house of formation.  Known as the “second cradle” of the Oblates, thousands of seminarians would call the place home over the years and would eventually become missionaries throughout France and around the world.

With the number of men discerning a call to religious life on the decline, the seminarian program was closed around 1960.  The Oblates then focused their attention on receiving retreatants, helping children prepare for their confirmation and hosting events like the 30-day De Mazenod Experience so Oblates and their lay collaborators can have a better understanding of the Oblate charism.

Today about 15 Oblate priests and brothers are assigned to Notre Dame de Lumiéres.  Some are elderly or infirmed while others continue to minister to pilgrims and help out at 16 nearby parishes.

And through their ministries, the Oblates at Notre Dame de Lumiéres continue to shine the light of Our Lady in order to brighten the lives of people in need.