Early introduction to key virtues is an important step in helping a child begin to develop a virtuous and purposeful life.

The Catechism of the Catholic Church tells us:

A virtue is a firm attitude to do what is right. Its direct opposite is a vice. A vice is a habit to do what is wrong. Prudence, justice, fortitude and temperance are called the human or cardinal virtues because they forge our human character. These four habits assist us in developing a pure heart that is open to God’s will.

“The moral virtues grow through education, deliberate acts and perseverance in struggle. Divine grace (God’s special help that strengthens us) purifies and elevates the virtues in our lives.”
Catechism of the Catholic Church #1839

We have prepared some materials to help children of every age (and parents too!) understand and practice virtuous living. I hope they will be a useful tool for you as you raise our young brothers and sisters in Christ!

This Month’s Virtue is: Responsibility

“Train the young in a way they should go; even when old, they will not swerve from it”. (Proverbs 22:6)

Exposing our children to stories of the Saints is important for their faith development. The Saints are heroes of the faith! We are called to be like them and to live for Jesus.

I hope you will enjoy the story of St. Henry II and have the same passion for spreading the Gospel that he did!

Much like St. Henry II, my brother Missionary Oblates travel far and wide to bring Jesus’ love to the poorest and most abandoned throughout the world.

Saint of the Month for May,
St. Henry II

“He indeed died for all, so that those who live might no longer live for themselves but for him who for their sake died and was raised.” (2 Corinthians 5:15) 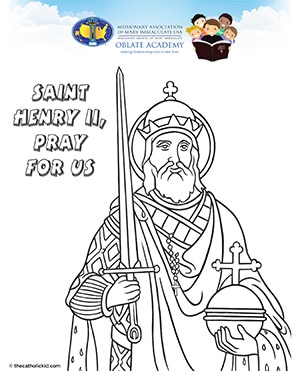 Henry was born in May 973, the son of Duke Henry II of Bavaria and Gisela of Burgundy. His father came into conflict with his cousin, the Holy Roman Emperor Otto, and was exiled. During his father’s exile, young Henry lived in Hildesheim. Henry was educated in Christian faith by Bishop Wolfgang Regensburg. Bishop’s teachings on charity left a big impression with Henry. He was and dedicated to his studies and for a short time was considered for the priesthood. But when Henry was thirteen years old, his father died and he was elected by the Bavarian nobles as the new duke to succeed his father. In 999, Henry married Cunigunde of Luxembourg. The church supported him becoming King of Germany, and he was crowned in 1002.

As king, Henry encouraged the church to reform its practices and follow canon law. Henry worked to be a good and just king. He brought a peaceful end to revolt in his territory and pardoned the people rebelling.

In 1014, Pope Benedict VIII crowned him as head of the Holy Roman Empire. Henry II spent the next several years consolidating his power within his borders. Henry faced political turmoil and was not always seen as the rightful ruler. However, after military successes, much of the Italian clergy and some noble families swore allegiance to him. Henry returned to Germany and made his journey a pilgrimage, stopping at different monasteries along the way. Henry was patron of churches and monasteries. Henry was also very concerned for the poor, making large donations to help the poor and needy.

In the last years of his life, Henry was afflicted with a grave illness that crippled his leg. But this did not stop him from spending a great amount of time in prayer. At one point, he considered leaving his duties to become a monk. St. Henry II died in July of 1024. He was canonized in 1146. His feast day is July 13.

St. Henry II, please be my friend.
Help me to be like you and practice charity with others and share the gifts God has given me every day.
Pray for me so I might serve the poor and others in their time of need.
St. Henry II, pray for us!

Download the activity sheet and please send me your prayer requests and petitions in the form below!