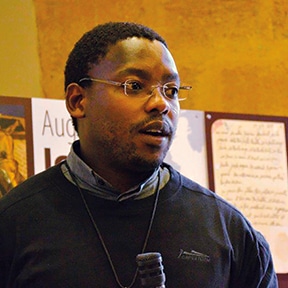 Father Bonga Majola, O.M.I. – A Missionary to the World

In 1852, St. Eugene De Mazenod sent his first missionaries to southern Africa.  Those Missionary Oblates left from the port of Marseille, France never to return to their homeland again.

Today, more than 160 years later, Fr. Bonga Majola, O.M.I. occasionally goes down to the port in Marseille.  As he looks out at the ocean, he says a prayer of gratitude for those early Oblate missionaries.  A native of South Africa, Fr. Majola is the fruit of their labor.  He now helps people discover the wisdom of St. Eugene at the birthplace of the congregation.

“I am truly blessed to be working in this ministry, and grateful for the Oblates before me who paved the way,” said Fr. Majola.

Father Majola is part of the Oblate team ministering at the Eugene De Mazenod International Center in Aix-en-Provence, just a short drive from the port in Marseille.  His ministry includes leading the De Mazenod Experience, an opportunity for participants to discover the Oblate charism in their everyday life of mission and ministry.

Father Majola never expected to be working at the most revered place in the Oblate world, especially so early in his priestly ministry.  He was assigned to the Aix community just two years after his ordination.

Born in South Africa in 1981, Fr. Majola knew very little about the Oblates growing up.  He met the Oblates in college and was drawn to their passion for serving the poorest of the poor.  He entered the novitiate in 2005 and was ordained in 2011 after completing his theological studies at the Gregorian University in Rome.

Father Majola’s first assignment was as an assistant parish priest at St. Charles Borromeo Parish in Victory Park, Johannesburg.  He was mainly responsible for the youth ministry at the parish, and also did vocation ministry in South Africa.

“I always thought of myself as not an ideal Oblate according to St. Eugene’s standards, that if he had been around he would have kicked me out a long time ago,” said Fr. Majola.

Despite his early trepidation, Fr. Majola quickly embraced ministering in Aix.  As a young Oblate, he brings a fresh perspective to the retreats he leads.  Most of the participants are veteran missionaries, and Fr. Majola says he finds much joy when they leave the retreats full of life, hope and recommitted to serving Jesus and His Church.

Father Majola also said that working in Aix has given him a much deeper respect for St. Eugene De Mazneod and the founder’s total commitment to bringing the Good News of Jesus Christ to the most forgotten.

“Saint Eugene’s passionate love for Jesus Christ and the Church inspires me to work hard in deepening my personal relationship with Christ,” said Fr. Majola.  “The way St. Eugene embraced the cross, in its different forms, allowing himself to be formed by it, gives me courage to faithfully carry mine.  Saint Eugene’s thirst for holiness and to do all things for the glory of God and the salvation of souls has given me a new purpose in my life.”

In recent years, Fr. Majola has become the unofficial tour guide of the community, showing visitors the Oblate sites in Aix, St. Eugene’s hometown, and Marseille, where St. Eugene served as Bishop.  In Marseille, Fr. Majola likes to bring visitors to the Basilica of Notre Dame de la Garde, located at the highest point in the city.

With it’s panoramic views, visitors can see for miles across the Mediterranean Sea.  It is a view that was experienced by St. Eugene De Mazenod when he sent his missionaries out to evangelize the world.  And it is the same view experienced today by Fr. Majola, a disciple of St. Eugene, who is evangelizing missionaries from around the world.

A Bishop for the Poor in Zambia

A Pastor for the Curious

Father Bonga Majola, O.M.I. A Missionary to the World

“I want to be with my family, in peace.”