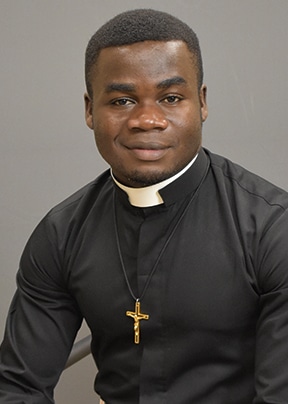 Brother Solomon Gaja, O.M.I. is a pioneer Missionary Oblate.  And he is still four years away from ordination.

Brother Solomon is the first Nigerian Oblate to study for the priesthood in the United States.  He is currently in his first year of studies at Oblate School of Theology in San Antonio, Texas.  As a scholastic, Bro. Solomon lives, prays and studies with other Oblate seminarians from around the world.

“When they told me I was going to the Untied States I didn’t know what to expect,” said Bro. Solomon.  “But it has turned out to be such a nice, multicultural experience for me.”

Brother Solomon’s journey to San Antonio, and to the priesthood, began in Nigeria as the son of a mother who is a business woman and a father who works in construction.  The family has a strong Catholic faith and Bro. Solomon was an altar server from an early age.

“I thought about becoming a priest even in grade school, but it was in high school that I really decided that I wanted to become a priest and join the Missionary Oblates,” said Bro. Solomon.

Because the Oblates have a small presence in Nigeria, Bro. Solomon needed to leave his homeland in order to begin studies for the priesthood.  He learned how to speak French, which allowed him to spend six years at the Oblates’ pre-novitiate and novitiate programs in Cameroon.

In addition to becoming fluent in French, Bro. Solomon also learned English.  His skills in language made him the likely choice to be the first Nigerian seminarian to study in the United States.

Brother Solomon said he felt right at home in San Antonio.  Six of the 12 seminarians currently living at the Oblate Seminary Residence are from Africa.

Brother Solomon has spent his entire adult life away from Nigeria, good preparation for a missionary who could be sent nearly anywhere in the world. But no matter where he goes, Bro. Solomon will always be a pioneer Missionary Oblate, blazing a new path for others to follow.

We Are Lucky To Know Fr. Benny

Searching For A Better Future In Tijuana

A Wake-Up Call To Get Involved

The Next Generation Of Oblates

God Has Been Good To Fr. Frank

Nobody Should Ever Die Without Being Loved