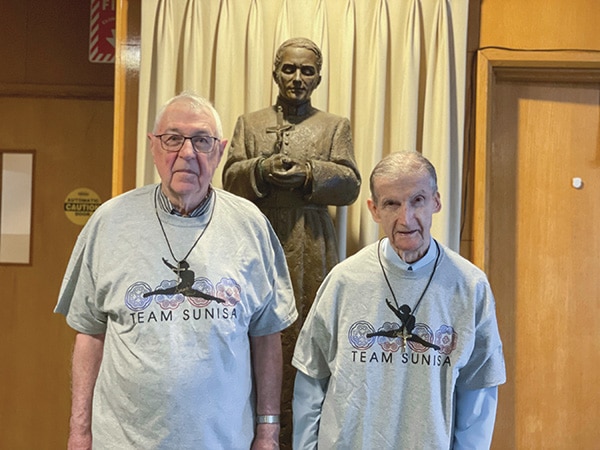 When Sunisa Lee won the gold medal at the Olympics as the gymnastics all around champion, her family in St. Paul, Minnesota celebrated with great pride. And that included several Missionary Oblates.

Sunisa was the first Hmong American to compete for the United States in the Olympics. The Missionary Oblates have worked with the Hmong community in St. Paul for decades and continue to do so today. Several of the parishioners at the Oblates’ St. Patrick’s Church are members of Sunisa’s family.

Joua and Kou Ly are Oblate Associates and leaders of the Hmong Catholic Community at St. Patrick’s Church. Prior to the Olympics they contacted the Oblates to ask for prayers for Sunisa, their niece, who was attempting to make the U.S.A. Gymnastics team for the Tokyo Olympics.

Not only did Sunisa make the team, she went on to become the leader of the U.S. squad. Her success at the Olympics brought an abundance of joy to the Hmong community, an ethnic group from southeast Asia that most people had
no knowledge about.

The Hmongs are primarily from Laos and were evangelized in the 1950s and 60s by Catholic missionaries, including the Missionary Oblates. The Hmongs were supporters of the United States during the Vietnam War. As a result, they were persecuted by the Communists
when they took over Laos.

Many Hmong fled the country, and thousands found their way to Minnesota. Father Daniel Taillez, O.M.I. also had to flee Laos and ended up in Minnesota where he led the Oblates’ ministry to the Hmong people for decades.

For more than 40 years the Oblates in St. Paul, Minnesota have been working with the Hmong community to meet their spiritual needs and to help them preserve their culture. The Oblates founded the Hmong American National Catholic Association to develop prayer books, hymnals and other worship materials for Hmong Catholics.

Over the years, the Oblates in Minnesota have baptized more than 500 people of Hmong heritage into the Church. Today, they continue to have an extensive outreach to the Hmong community and offer a Mass in Hmong every month.

Sio Lo, a parishioner at St. Patrick’s Parish, said the Oblates have truly been at the forefront of ministering to the Hmong people.

“About a century ago, it was Oblate priests from France that found our people in the jungles of Laos. They risked their lives to find us there. Once they found us, they took the time to learn our culture and our ways, in order to truly teach us about Our Lord and Savior Jesus Christ,” said Sia.

“Today we are most thankful for our Oblate priests. Through Christ they clean our souls every Sunday with holy water and protect us from evil. Through Christ they teach us the blessings of Heaven and the true purpose of life. Through the power of Christ, they have led us to be closer to God and for that we cannot thank them enough.”

Standing on the Shoulders of Giants

The Adventures of Fr. Julito

Worthy of this Great Vocation

“Do It and Be Happy”

My Life Has Been a Great Adventure

God Will Point the Way

Giving his Life to God the Happy Trails of Fr. Mike Amesse, O.M.I.