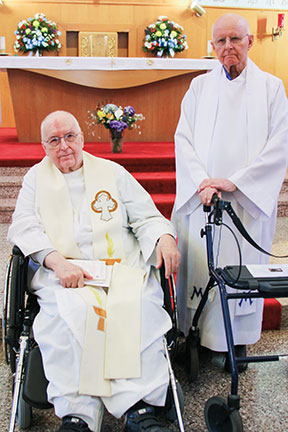 When Roger Cyr was a boy, he didn’t want to spend a lot of time with his older brother, Myles.  Roger wanted to do his own thing and have his own friends.

More than 70 years later, Fr. Roger and Fr. Myles were inseparable, living on the same floor of the Oblate Residence in Tewksbury, Massachusetts.  And every day Fr. Roger said a prayer of gratitude that his big brother was just down the hall.

“We lived together as kids and then we started living together again in our 80s,” said Fr. Roger.  “When I was young I didn’t want to do what my brother did, but eventually he influenced me to follow his example, and I have been grateful ever since.”

On April 9, Fr. Roger passed away peacefully in his room.  His brother Myles was there by his side, a brother’s keeper to the very end.

Father Myles was ordained a Missionary Oblate on June 17, 1954.  He never pressured his young brother to follow in his footsteps, but was filled with pride when Fr. Roger was ordained on August 15, 1959.

“Sixty years ago I was called and stepped forward to begin a special relationship with Christ and His Church,” said Fr. Roger.  “I took what little gifts I had and assimilated them to Christ, so that I could become each day that which Christ called me to be.”

Ironically, the Cyr brothers never ministered together as Oblate priests.  They worked at parishes and other Oblate ministries throughout New England.

One place where both Fr. Cyrs left a lasting impact was the Shrine of St. Joseph the Worker, in Lowell, Massachusetts.  The Shrine serves workers in downtown Lowell and allows people to drop in to take a few minutes for spiritual nourishment.

“The Shrine’s ministry really is centered around the Sacrament of Reconciliation,” said Fr. Myles.  “I never heard so many confessions in my life.”

Wherever the Cyr brothers ministered, they always had a common purpose.  They always wanted everyone to be reminded that someone loves them, and that they don’t have to be perfect to follow Christ.

“Christ saved the world with 12 imperfect guys,” said Fr. Roger.  “A saint is a sinner who gets up and keeps walking when they fall.”

“I told Roger that if God was ending this chapter of his ministry then he was ending my chapter too,” said Fr. Myles.

At the infirmary Fr. Roger had limited mobility and spent most of his time in his room.  He focused his final missionary time on ministering through the power of prayer.  He had one piece of technology, a tablet to read the Bible and help him recite his prayers.

Father Roger said he had everything he needed in his room.  He had two important items around his neck, an Oblate cross and an emergency button.  He had a television but didn’t turn it on for more than four years.  Father Roger said he wanted to avoid too much noise in his room because in the silence is where he could hear Christ.

Three times a day, the quiet in Fr. Roger’s room was interrupted when his older brother came to visit.  The visits were a way for Fr. Myles to minister to his brother, and to remind him that he was not alone.  In the evening, the two brothers recited the rosary before going to bed.

It was their daily ministry, and a simple act of brotherly love.