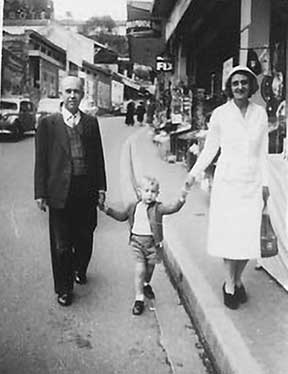 Discovering A Mother’s Love at Lourdes

When Fr. Paul Horrocks, O.M.I. made his first pilgrimage to Lourdes, France he was just three years old.  His parents took him there after visiting an uncle in England.  Young Paul wasn’t impressed.

Father Paul can still remember a few things about that visit.  The water in the baths was very cold and he wanted to get out immediately.  He also remembers a lady scolding him for wasting water when he tried to wash his feet at the taps.

Father Paul may not have been too impressed with Lourdes as a child, but today, after ministering there for 15 years, he has a much different opinion.

“Many pilgrims come to Lourdes seeking a new beginning or for light that will give meaning to their lives,” said Fr. Paul.  “They come to find a new freedom in and through Christ, and this I find extremely enriching.”

Father Paul was born on November 20, 1955 in Durban, South Africa into a family with a strong Catholic faith.  He began to ponder a vocation to the priesthood during his teenage years and joined the Oblates’ pre-novitiate program in 1974.  He was ordained in 1982.

“I chose the Oblates because my parish was run by them and I saw
them as holy, down-to-earth men,” said Fr. Paul.

After ordination Fr. Paul worked as a Chaplain at a 5,000-bed hospital in South Africa.  A year later, he accepted an assignment to Zimbabwe and would spend the next 20 years there, providing pastoral services and managing a large farm.

In 2003 Fr. Paul’s superior was in Rome and learned that there was a vacancy for an English language Chaplain at Lourdes.  “Being aware of my great devotion to Mother Mary, he recommended me for the position,” said Fr. Paul.  “I was accepted, and arrived in Lourdes the same year, on my birthday, to take up my duties.”

At Lourdes Fr. Paul said the Gospel is present more in action than in words.  He was amazed that people were so willing to sacrifice their time and money in order to come to the place where Our Lady appeared to St. Bernadette.

Father Paul remembers a man who traveled all the way from Singapore to make his confession at Lourdes.  The man felt that Lourdes was the place where he could best seek reconciliation with the Lord and His Church.  Father Paul said it was an honor to hear this man’s confession.

“I was surprised that he would travel such a long distance to be here,” said Fr. Paul.  “But on reflection it simply shows a power, or more accurately a mother’s love, behind the message of Lourdes.”

Over the past 15 years, Fr. Paul said he discovered that Lourdes was not so much a church built of stone and mortar, but a spiritual temple where pilgrims can experience healing, acceptance, protection and other qualities associated with a nurturing mother.

“At Lourdes, I discovered Mary as the Mother of the Church,” said Fr. Paul.  “Where do children who are experiencing the harshness of life go first for help and relief – their mother.”

Father Paul also said that Our Lady’s choice to have St. Bernadette be the visionary of her message reminds him of his identity as a Missionary Oblate.  The Oblates give preference to ministering to the poorest of the poor, and St. Bernadette lived in extreme poverty when Our Lady appeared to her in 1858.

“As an Oblate I am challenged to give priority to the poor,” said Fr. Paul.  “I see St. Bernadette as an image of our Blessed Mother; someone who may have been poor but who had a strong character, totally dedicated to the Lord and His Gospel.”

Soon Fr. Paul will take his priority for the poor to a new ministry.  His time at Lourdes is coming to an end, and he will be moving to Ireland for a yet to be determined assignment.  Father Paul’s new missionary work will unquestionably be influenced by his last 15 years at Lourdes.

“I am sure that whatever my next assignment will be, my experience in Lourdes will help me to serve those I minister to in a caring and supportive way, witnessing to Gospel values and based on service that is so evident here at Lourdes,” said Fr. Paul.