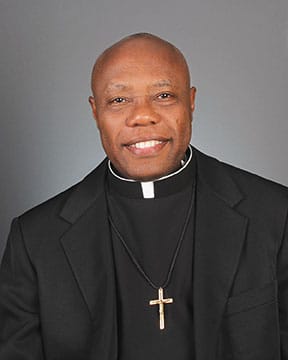 Ministering in Tewksbury, Massachusetts may be physically very far away from Haiti.  But spiritually, Fr. Bouzi can return to Haiti just by walking next door to the Oblate Residence for infirmed and elderly Oblates.

“During those 41 years I could have left many times and returned to the United States,” said Fr. Morin.  “But I never wanted too, because Haiti is where I found my happiness.”

During his four decades in Haiti, Fr. Morin ministered at parishes throughout the country.  When he did move back to the United States because of health issues, he continued to work with Haitian communities in New Orleans and Boston.
Today, some of Fr. Morin’s Haitian friends will come by the Oblate Residence and bring the 94-year-old missionary a few of his favorite Haitian meals.

In addition to Frs. Morin and Héon, several other elder and infirmed Oblates living in Tewskbury have also served in Haiti for shorter durations.  Brother Gus Cote, O.M.I. never ministered in Haiti but he was the main contact for American Oblates there for nearly 20 years.  Brother Gus coordinated hundreds of shipments of donated materials to the Oblates in Haiti.

Today Bro. Gus still tries to communicate with four American Oblates ministering in Haiti, three of whom have been there for more than 50 years each.

Father John Henault, O.M.I. has pastoral responsibilities in the city of Dolan and also works with Mother Teresa’s sisters to care for the sick.  Father Henault lived 25 years on Ile-a-Vache (Cow Island) where he: filled in a huge swamp to avoid malaria, built a 50-foot wharf, enlarged the church, kept two schools open, built several roads and bridges and directed a cholera center.  He also drilled many wells and set up a solar panel water pumping system that provides fresh water to 11 public wells on the island.