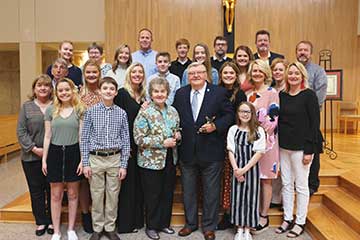 For Jack and Sandy Weck, more than 50 years of work and service to the Missionary Oblates was celebrated in April as they were honored as Honorary Oblates of Mary Immaculate (HOMI).

Jack was hired by the Oblates the day after he graduated high school in 1960, by Fr. Edwin Guild, O.M.I. the founder of the National Shrine of Our Lady of the Snows.  Jack began his career in the Production Department where the fundraising letters were printed and mailed.  He then worked 35 years as the Oblates’ photographer before moving into the acquisition of premiums (thank-you gifts for donors) and finally in the Charitable and Planned Giving Department.

Jack and Sandy were married in 1963.  Sandy became active in helping out in Shrine and Oblate ministries while raising six children.  Sandy even got the children involved by filling Holy Water bottles in the basement which earned the children one penny for each bottle filled.

“This is such a great honor for us,” said Jack.  “I felt all my life like I was part of the Oblates, now I guess Sandy and I really are!”

Father Wittenbrink was the founder of the Talking Book program for the St. Louis metropolitan area in 1972.  It was called Radio Information Services and provided sight-impaired individuals with special receivers allowing them to hear an audio stream consisting of news and features from the daily newspaper, as well as readings from books and magazines.

Father Wittenbrink went on to establish similar services in ten Illinois cities, as well as in Texas, Canada and the Philippines.  The service founded by Fr. Wittenbrink continues today under its new name, MindsEye.

On average, 142 people die each day from opioid-related causes.  So severe is the epidemic that in some places it has been declared a public health emergency.

The Missionary Oblates, by way of the Oblate International Pastoral Investment Trust, is partnering with Investors for Opioid Accountability in calling for pharmaceutical and related companies to take action to stem this national crisis.  Backed up by more than $2.2 trillion in total assets, the nearly 50 members of the coalition include faith-based organizations, state, city and labor funds and asset managers.

“Corporations pay attention to faith-based groups simply because we have been around so long,” said Fr. Finn.  “Since the 1960s, when Vatican II produced the document Gaudium et Spes, the Catholic Church has been called to look outward, toward the world.”

On May 18, more than 100 people gathered in a rural part of Monroe County, Illinois to celebrate the work of Fr. Paul Wightman, O.M.I.  Father Paul was recognized for a roughly 70-year career as a spelunker, surveyor and mapper of caves, most notably, Fogelpole Cave, the largest and most biologically diverse cave in Illinois.

Father Paul began exploring the cave system as a teenager.  After his ordination in 1955, he would take his students at St. Henry’s Prep Seminary to explore Fogelpole Cave.  Eventually he mapped about eight miles of passages in the system.

Today, the cave is part of a 27-acre nature preserve owned by the Illinois Department of Natural Resources.  It has now been named the Paul Wightman Subterranean Nature Preserve in honor of Fr. Paul’s legacy of exploration and preservation of the caves of Monroe County.

At the age of 90, Fr. Paul does not explore caves anymore.  He ministers full-time in the light, helping people in his five rural parishes in the Missouri Ozarks discover the Light of Christ.