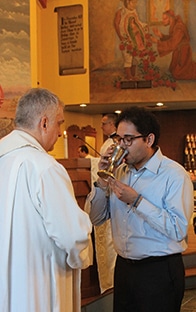 Marlowe Romero’s journey as a Missionary Oblate began in one of the most unlikely places possible — the confessional.

No, Marlowe did not have to join the Oblates as penance for a past sin.  Instead, it was the priest who was hearing the confession that sparked an interest in Marlowe to join the Oblates.  That priest just happened to be Fr. Richard Hall, O.M.I. the Oblates’ Area Vocation Director.

“I had been discerning about the priesthood for about a year, but I was looking mostly at the Franciscans,” said Marlowe.  “In talking with Fr. Richard I realized I was being called to be a Missionary Oblate, a man for the Gospel.”

That chance encounter in the confessional eventually led to Marlowe attending a “Come and See” held at the Oblates’ mission in Tijuana, B.C., Mexico.  After spending time with the Oblates and the poor they serve in Tijuana, Marlowe decided to join the Oblates’ pre-novitiate program.

Marlowe realized, “The ‘ah-ha’ moment came when I walked and prayed with this beautiful family in Tijuana. Though the father was blind and they were desperately poor, they were united in deep love and gratitude.  Christ opened my eyes to a deeper reality.  I wanted to be a missionary for the most abandoned and poor.”

Marlowe was born and raised in San Antonio, Texas.  He lived just about a mile away from the Oblates’ Lourdes Grotto and Our Lady of Guadalupe Tepeyac Shrine.  As a child, he and his family would often visit the shrine and pray to Our Lady.

In high school and college, Marlowe did not recognize his calling to the priesthood.  He was more focused on the creative arts and the social life.  But seeking an authentic community, he joined the college’s Catholic Student Association, where he realized true inspiration comes from the Holy Spirit moving in the Christian community.

From there he started volunteering with Catholic Charities, tutoring refugees and inner-city children.  Eventually that led to a job at Catholic Charities where he served refugees from around the world adjusting to life in the United States.

“Working with the refugees gave me a wider perspective of life,” said Marlowe.
“I began to ask myself how I could bring the Gospel to life with greater love in little ways.”

In Marlowe’s first year of pre-novitiate he witnessed the Oblates serve multi-cultural and refugee parishes.  Marlowe said, “My heart opened to embrace the world, I walked side by side with the young and old, I walked humbly with God.”

Today Marlowe is a member of the Oblates’ pre-novitiate community.  He is currently studying philosophy as well as learning the charism of the Oblate founder St. Eugene De Mazenod —
with charity among his brothers and zeal for souls.

To this day Marlowe remembers what Fr. Richard Hall, O.M.I. told him in that confessional: “Be the man God created you to be.”  And every day Marlowe takes that to heart as he journeys with the Missionary Oblates.

“My vocation is love, and it is in Mary Immaculate’s hands,” said Marlowe.  “She will truly show me the way.”

Placing His Life in God’s Hand

A Church That Always Survives

An Oblate Life Full of Surprises

On the Path to Sainthood:  Servant of God Ludwik Wrodarczyk,  O.M.I.

The Idea of the American Dream Was Worth It

Building Places of Worship and Refuge in Zambia

Message From A Friend

A Fighter For Racial Justice