In August each year, young men from around the world arrive at the Blessed Mario Borzaga Community in San Antonio, Texas. They are Missionary Oblate scholastics, students attending Oblate School of Theology (OST).

When the scholastics arrive at the community, they are given a shirt with a quote from Blessed Mario Borzaga, O.M.I. a Missionary Oblate who was martyred in Laos for refusing to give up his faith. The quote reads: “My vocation is to be a happy man.” Today, twelve “happy men” are studying and discerning their calling to life as Missionary Oblates as part of the Borzaga community. One of the scholastics, Bro. David Chisha, O.M.I. of Zambia explains: “We need to find our happiness in life, and when we embrace God, we become happy.”

To help ensure the happiness of the scholastics as they embrace God, the Missionary Oblates have created the Blessed Mario Borzaga Scholarship Program to cover the expenses of Oblate seminarians from foreign countries who attend OST. The program allows these students to live and study at the school without creating a financial hardship on the Oblates in their native countries. Without the scholarship program, some of these scholastics might not be able to pursue their religious calling because of a lack of funds.

The scholarship program was created because vocations to the Missionary Oblates are growing in many countries. Currently, there are 600 seminarians from more than 60 countries who are studying to become the next generation of Oblate priests and brothers.

Brother Henry Zayamoe, O.M.I. has taken one of the most unusual paths to the Borzaga community. He grew up in Burma (now Myanmar) and his family had to flee violence and religious persecution. He lived for six years in a refugee camp in Thailand before immigrating to Buffalo, New York where the family joined an Oblate parish. Today he is in his third year of studies at OST.

“As I make this journey, I ask a favor from you,” said Bro. Henry. “Please consider making a donation in support of the Blessed Mario Borzaga Scholarship Program.

Most of us come from families or countries with very limited resources, so we must rely on friends like you to cover our basic living and educational expenses. You truly are a partner with me and my brother seminarians as we become the future of the Oblates and the Church.”

There are currently 12 young men studying to become Missionary Oblate priests at the Blessed Mario Borzaga Formation Community in San Antonio, Texas. These men will allow the Oblates to have impactful ministries for generations to come. 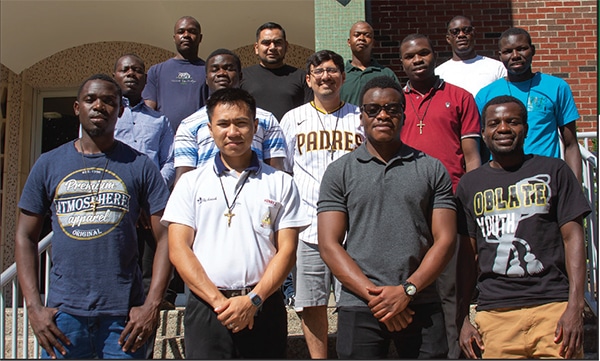 HENRY ZAYAMOE As a child, Henry and his family fled Burma during a military coup. They lived several years in a refugee camp in Thailand before immigrating to Buffalo, New York where they became active in an Oblate parish.

BRANDON ALEXIS GARCIA Brandon is from Tijuana, B.C., Mexico where he was active as a child at the Oblates’ Mary Immaculate Parish.

ZANE NONG Zane is from a small village in Botswana and was an Altar Server at a small chapel run by the Oblates.

MOSES KHISA From Kenya, Moses always has had a strong devotion to Our Lady and was drawn to the Oblates because of their missionary work and devotion to Mary Immaculate.

SOLOMON GAJA Solomon is the first Nigerian Oblate to study in the United States. He has spent his entire adult life away from his home country.

JACQUE MARIE LIBA Jacque is from Chad where he would tag along with his parents as they taught catechism classes at an Oblate parish.

DOGO AMAGUEDEAU Dogo’s father was a pagan and a polygamist in Cameroon. He converted to Catholicism after Dogo joined the Oblates as a seminarian.

MAXIMILIEN KENFACK Max is a persistent missionary. His journey from Cameroon to the United States was delayed for two years because of visa problems and Covid-19 restrictions.

The following seminarians at the Borzaga community are from Zambia.

RAFAEL BANDA Rafael joined the Oblates because of their accessibility to their parishioners, giving people easy access to a priest.

DAVID CHISHA David was inspired by the Oblates’ zeal to preach the Gospel to the poor with their many faces.

MUSONDA CHOTA Musonda was so excited about being a Catholic that he became an Altar Server the day after his First Communion.

STANCO SIMOKONDA In high school, Stanco attended an Oblate “Come and See” and was drawn to the Oblates’ missionary spirit. He has lived away from home since the age of 15.

Whenever I visit with our Oblate Seminarians at the blessed Mario Borzaga Community, I am reminded of the words of Scripture:  “The harvest is plentiful, but the laborers are few. “

These young men are at the beginning of their Oblate journey.  In a few years they will begin to help the poorest of the poor harvest better lives.  Only a handful of men are called to this missionary life.  Fortunately, the Oblates have numerous scholastics willing to accept the challenge to become missionaries for life.

Whenever I visit the Borzaga community, I try to take part in evening prayer.  I am always struck by the diversity of the men gathered in the small chapel.  They come from the United States, Africa, Asia and Latin America, all with a common vision – to be of service to God and to the poor as Missionary Oblates.

That is why the Blessed Mario Borzaga Scholarship Program is so important.  Will you prayerfully consider a gift to this fund?  In doing so, it allows future Oblate priests and brothers to receive the world-class education and guidance needed to become effective missionaries throughout the world.

Please know that our seminarians are grateful for your support.  Each night during evening prayer, they take time to say a prayer of gratitude for you, because you are making their Oblate journey possible.

Most of the Missionary Oblate scholastics at the Blessed Mario Borzaga Formation Community come from impoverished countries where the Oblates have limited financial resources. While the Oblates in these countries do their best to stretch every dollar, they simply do not have enough funds to cover all the seminarian’s expenses. During the five years that a seminarian is a student at Oblate School of Theology, the cost for education and living expenses is $175,000.

The scholastic years are the most expensive period of an Oblate’s preparation for ministry. It is also the phase of Oblate formation that fosters skilled, committed young Oblates to the immediate service of the Church and those least touched by the Gospel of Christ. It is a modest investment compared to the importance of the lifechanging ministry the young Oblate will offer to God’s people for the rest of his life.

$3500 funds – tuition and living expenses for one seminarian for one year.

$17,500 funds – tuition and living expenses for one seminarian for six months.

$8,750  funds – funds tuition and living expenses for one seminarian for one quarter.

The Missionary Oblates are grateful to our friends who have remembered us through a bequest or charitable gift annuity. Please join us in prayer for these benefactors who have been called to their eternal rest with the Lord.