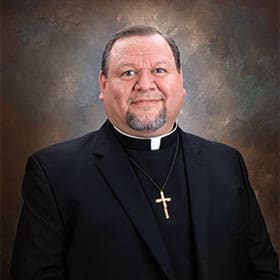 For three years after his ordination in 2014, home for Fr. David Uribe, O.M.I. was the National Shrine of Our Lady of the Snows. He was Pilgrimage Director at the Shrine, helping people discover ways to bring healing and hope into their lives.

Today, after ministering at a parish in Houston, Texas and with the Oblates’ fundraising programs, Fr. David is back home at the Shrine, this time as the new Shrine Director. He replaces Fr. Andy Knop, O.M.I. who accepted the challenge of starting a new Oblate ministry in Duluth, Minnesota, his former hometown.

“The Shrine is the spiritual home of the Missionary Oblates in the United States and is a place of inspiration and prayers for thousands of pilgrims every year,” said Fr. David. “I am truly honored and blessed to be at this spiritual place again.”

Father David’s Oblate journey began at the age of 14 when he entered St. Anthony’s High School Seminary in San Antonio, Texas. The Oblate charism was etched into him during high school and after graduation he entered the Oblate pre-novitiate program. But after two years in the formation program he felt it was just not the right time for him to continue his journey to the priesthood.

Father David attended St. Edward’s University in Austin and earned a Bachelors Degree in Psychology and a Masters in Organizational Leadership and Ethics. He worked for the university, including nine years as Internship Coordinator in the Career Planning Office.

“Even though I was successful in my professional and personal life there was an undeniable void,” said Fr. David. “After not practicing my faith for several years, I went to Mass at a local parish, Our Lady of Guadalupe. As soon as I walked through the door, I realized it was God who was missing from my life. That void was filled instantly. And it was an Oblate parish.”

Father David discerned for two years on his calling to the priesthood and in 2007 was admitted into the Oblates’ pre-novitiate program and was eventually ordained in 2014. He said his life as an Oblate, first as a seminarian and now as a priest, has been one big blessing.

Father David’s current ministry is a double blessing. In addition to being the Shrine Director, he will continue to work as the Oblate Chaplain Director for the Missionary Association, helping to link benefactors with Oblate missionaries.

“It is an exciting time to join the Shrine again as well as working to ensure that our benefactors and donors share in our Oblate ministries,” said Fr. David. “This new chapter in my life is just one more way that I am benefiting from the decision to say ’yes’ to God’s call.”