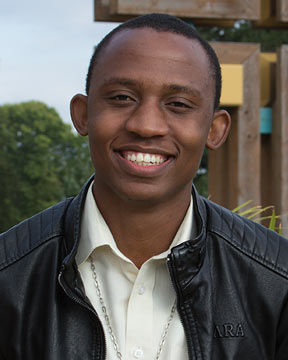 Brother Wilbroad Kapembwa, O.M.I. is currently an Oblate seminarian studying at St. Joseph Institute in Cedar, South Africa.  Originally from Zambia, Bro. Willboard spent last year discerning his calling at the Oblates’ novitiate in Godfrey, Illinois.  While at the novitiate, Bro. Wilbroad wrote this mock trial examining how we are guilty of destroying our natural resources.

In my world of fantasy last night, I was in the reality of life, in the court of justice, standing in the dock feeling guilt and shame.  I stood facing Mother Earth as she looked me right in the eyes, hers pouring with tears of pain and anguish.  Mother Earth stood before the Judge, the Lordship whose name I was told is God, like an African woman in pursuit of justice.  She checked her wrap ensuring it was well adjusted around her.

Visibly in pain, she cleared her throat and lamented before the Judge who seemed to already agree with her.  While pointing at me with a finger of anger she said, “Your Honor, this human being together with his colleagues, who claim to have been given reason to deduce right from wrong is a disappointment.  I understand that my children and I are placed under his care, but unfortunately, he has treated me with greed, disrespect and unjustly all because of his insatiable appetite for power and profit.  In addition, this human being together with his colleagues has rained down upon my life an ecological crisis which has mercilessly afflicted me and my children.”

“Your Honor, my beautiful daughters, namely clean air, fresh water, fertile soil and this one who resides in Luwingu District in Zambia, what’s her name… yes ozone layer, are being ruined by this human’s toxic substances, pollutants, acids and other poisonous waste products of his modern society.“

Having said this, like a mother mourning the loss of her beloved children, Mother Earth sobbed African style with a melodic pattern.  And after a short period of sobbing, she checked her wrap, cleared her throat and wiped off her tears with her hands, and continued, “Your Honor, this human being’s destruction of my habitats is quickly causing many life forms and species I have nurtured over many years to become extinct and if not stopped this human will never see them again.  Your Honor, I seek your sound and merciful ruling in my case.“

At this juncture, from the look on the jury’s faces, I could tell that sentencing was inevitable.  When the Judge asked me to say something, with shame and guilt, I stood and said, “Your Honor, I Wilbroad Kapembwa Waku Luwingu, stand guilty, guilty as charged.”