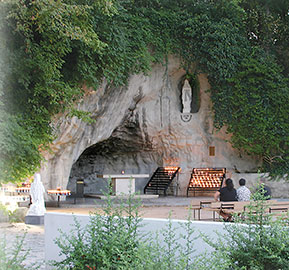 The Lourdes Grotto at the Shrine has been providing pilgrims with small miracles in their lives for the past 60 years.

Located in a beautiful, wooded area, the Lourdes Grotto was among the first devotional sites completed at the Shrine.  It is a replica of the famed Lourdes Grotto in France where Our Lady appeared in 1858 to a young, peasant girl named Bernadette Soubirous.

During the grotto construction, finding a way to preserve the contours of the hillside while simulating the appearance of a rock cavern was a challenge for engineers.  A local artisan proposed a way to duplicate the grotto at Lourdes.  Dirt was piled up in such a way as to form a mold for the cavern.

Cement was poured over, around and behind the dirt mold to form a three-foot thick cement shell.  The dirt was removed after the cement hardened and put on top of the structure.  The result was nearly an exact replica scaled to two-thirds the size of the original Lourdes Grotto in France.

Until the Shrine Amphitheatre was constructed, the Lourdes Grotto was the site of many of the larger outside devotional services at the Shrine, including several of the first novenas to Our Lady of the Snows on the Shrine’s grounds.

Today, the Lourdes Grotto continues to be a popular devotional site for pilgrims for quiet prayer and reflection.  Mass and devotional services are celebrated on occasion at the grotto to take advantage of the beauty of nature in an intimate, spirit-filled setting.