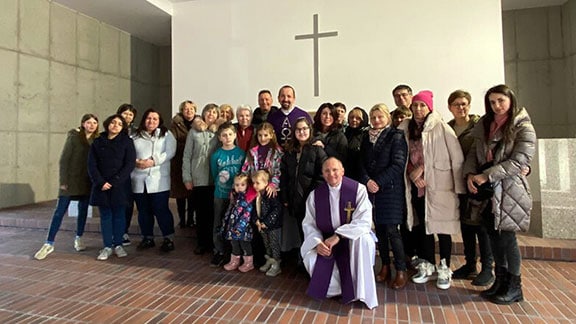 “On Sunday, the Provincial of the Polish Province visited war refugees from Ukraine who found refuge in the Oblate Youth Center in Kokotka, Poland. Currently, nearly 130 people are staying here, including about 60 children. Their stay and maintenance is financed by the Polish Province and private donors. 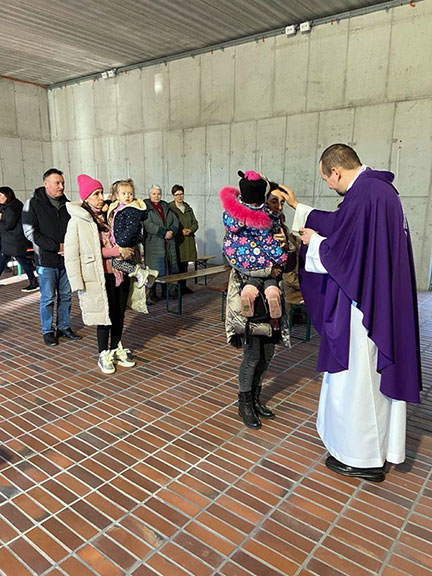 Father Paweł Zając OMI celebrated the Eucharist for those willing. In a word addressed to the faithful, he noted that for the first time Holy Mass was celebrated in the chapel of the Oblate youth center, which was still under construction. He compared the construction of this most important place for the OCM to the building of the Church community that we all are. Our task is to build a new world in which love will replace hate, joy will replace sadness, and we will not pay back evil for evil. Holy Mass was celebrated for the good stay of guests from Ukraine in Kokotka and for peace across our eastern border. In addition to the Ukrainians, the Eucharist was attended by several employees of the Oblate Youth Center, who help the guests of the center on a daily basis, and people who support the Oblate help.

After praying together, Fr. Paweł Zając OMI had the opportunity to meet the Oblates in Kokotka. Even though the group is very large, the atmosphere among the people is very good. Many animators organize integration activities and free time for them. It is very important not to follow the brutal hostilities in Ukraine on an ongoing basis and to despair. Most importantly for children.”

Living through the Ukraine war

Oblates in Ukraine shelter people in their homes

Oblates staying with the people

The Oblates do not leave their houses