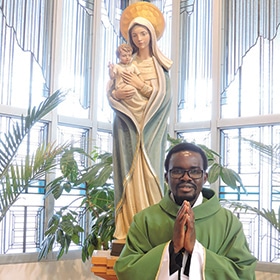 To be a good missionary, you must be willing to walk a mile in someone else’s shoes. For a group of Missionary Oblates from Zambia, that means trading in the sandals and sneakers of their youth for cowboy boots, moccasins and snow skis.

In recent years, a growing number of Oblates from Zambia have been coming to the United States to strengthen Oblate and diocesan ministries. Today these Oblates minister from New York to Texas and several locations in between.

“I have been warmly welcomed into my new Oblate house,” said FR. ABRAHAM CHIMESE, O.M.I. who works with Oblate seminarians in San Antonio, Texas. “There is just something special and enjoyable about this Oblate life, and you find it no matter where you go.”

There are currently 16 Oblates from Zambia in the United States who are ministering as priests, brothers or seminarians. Many of these Oblates have found a home in San Antonio.

FATHER HUMPHREY MILIMO, O.M.I. is Pastor at Holy Family Parish in San Antonio. Last year the Diocese of San Antonio asked the Oblates if they could staff the parish which was facing the possibility of closing.

Running Holy Family Parish is the third assignment for Fr. Humphrey. He was previously on the staff at the Oblate Novitiate and also worked in parish ministry in Buffalo, New York.

Two other Oblate priests from Zambia help out at Holy Family Parish while also working full-time assignments with the diocese.

FATHER HECTOR KALALUKA, O.M.I. works as a Prison Chaplain through the diocese’ Criminal Justice Ministry. His Oblate journey has already stretched from Zambia to Rome and now Texas.

FATHER GODFREY MWANSA, O.M.I. works as a Chaplain at eight hospitals in the San Antonio area. His ministry began last year
during the height of the Covid-19 pandemic.

“My ministry is not just for the patients but also for the families,” said Fr. Godfrey. “The focus cannot just be on death but must also be looked at as a celebration of life.”

Ministering to the sick and dying is nothing new for Fr. Godfrey. When Fr. Godfrey was in grade school, he was an Altar Server at his parish and routinely would go along with the priests to visit the sick and help administer the last rites.

At the Blessed Mario Borzaga Formation House in San Antonio, Fr. Abraham works with more than a dozen Oblate seminarians from around the world who are studying at Oblate School of Theology. Four of these Oblate seminarians are also from Zambia.

SCHOLASTIC BRO. STANCO SIMUKONDA, O.M.I. credits Fr. Abraham with inspiring him to pursue the priesthood at a very early age. Brother Stanco grew up in the Oblate parish of St. Michael in Kalabo, Zambia. As an Altar Server he was inspired by the Oblate priests and brothers who ministered there. When Fr. Abraham was a seminarian, he did his pastoral internship at St. Michael and encouraged the young men of the parish to consider religious life.

SCHOLASTIC BRO. DAVID CHISHA, O.M.I. is another Zambian seminarian who is being assisted on his Oblate journey by Fr. Abraham and the other formators in San Antonio. Brother David has been away from Zambia for more than four years while studying in the United States. Always smiling, Bro. David says that his vocation is to be a happy man.

“We all need to find happiness in our life,” said Bro. David. “And we find that happiness when we embrace God and each other.”

SCHOLASTIC BRO. MUSONDA CHOTA, O.M.I. joined the formation community in San Antonio last year after completing his novitiate year in the United States. Originally, he was expected to study for the priesthood in Rome or South Africa, but complications caused with his visa because of the Covid-19 pandemic made it easier to stay in the United States and attend Oblate School of Theology.

SCHOLASTIC BRO. RAFAEL BANDA, O.M.I. arrived in San Antonio last year to study theology. He joined the Oblates because he felt they did a wonderful job of providing easy access to a priest.

“To me the dioce San priests always seemed so very far away from the people. You saw them at the altar and that was about it,” explained Bro. Rafael. “But the Oblates are different. They greet you; they love you. They become part of your family. The Oblates give the people they serve easy access to a priest.”

At Immaculate Heart of Mary Novitiate in Godfrey, Illinois, BRO. GEORGE LITIYA, O.M.I. is part of the formation team. Brother George grew up in the Oblates’ Sancta Maria Parish in Lukulu in the Western Province of Zambia. In 1983, the parish was one of the first missions established in Zambia by Oblates from Texas and is still a vital part of Zambian delegation today.

Brother George is helping to guide five men through their novitiate year, a time of prayer and discernment concluding with first vows. Three of the novices are from Zambia.

CHILESHE MULENGA chose to pursue a religious calling after exploring a career as a doctor. He decided that he would rather be a healer of the soul than a healer of the body.

ROYD MIYOMBA learned about the Oblates while listening to a radio station the Oblates operated in Zambia. Royd lived a roving life as a child, attending six different grade schools. When he left to come to the United States his mom gave him a simple instruction: “Keep the faith and make us proud.”

SIPHO MUKOBOLA was just 11 years old when he left home to attend a minor seminary and start his Oblate journey. He started feeling a calling to the priesthood at the age of five when he became an Altar Server.

Three Oblate priests from Zambia are also ministering in very different environments in the United States.

FATHER EMMANUEL MULENGA, O.M.I. is Pastor at St. Augustine Parish in New Orleans, one of the most historic and colorful Catholic churches in the United States. Saint Augustine Parish was one of the first racially-integrated congregations in the country. The parish is a landmark in the African American community and attracts visitors from around the world for their Jazz Masses.

FATHER BENNY LIPALATA, O.M.I. is part of the Oblate ministry which serves six parishes on the White Earth Reservation of northern Minnesota. He arrived on the Reservation after ministering at St. Jude Shrine in New Orleans.

FATHER ELVIS MWAMBA, O.M.I. ministers at the National Shrine of Our Lady of the Snows where he helps pilgrims reach a deeper spirituality.

“I was once told to think of the last place you expect to be assigned and that is probably where you will go,” said Fr. Elvis. “I didn’t even think about going to the United States, but here I am, and it is a wonderful place to be.”

FATHER FELIX NYAMBE, O.M.I. recently joined the Oblate ministry at Our Lady of Hope Parish in Buffalo, New York. Father Felix speaks English and French which is very helpful in an ethnicallydiverse parish.

Working at Our Lady of Hope is Fr. Felix’s second assignment in the United States. He previously was an Oblate seminarian in the U.S., spending his novitiate year and several of his scholastic years discerning and studying for the priesthood.

When Fr. Felix was a seminarian, he was once asked why he joined the Oblates. His response was simple and prophetic.

“When you join the Oblates, you never know where you are going to end up,” said Fr. Felix. “That is because the world needs the Oblates in so many places to be God’s instrument of joy.”

Recording Stories Forever In His Heart

Why I Became A Missionary Oblate Of Mary Immaculate

Holding On To God Makes Everything Possible

The Power Of Faith And Education

Being A Missionary In Small Ways

Pre-Novices Discern Their Calling In Mexicali

The Enriching Life Of Brother Tom

All In The Mazenodian Family