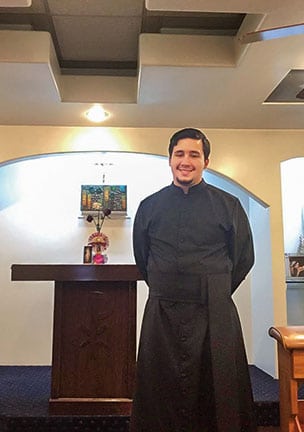 I am from a family of seven in Mexico City and have four sisters.  I grew up in a very conservative and religious family, and have had the blessing of my family’s full support of my vocation.

I have felt the call to the priesthood since I was five years old, and began discerning the priesthood when I was in the eighth grade.  I met the Oblates when I was six years old in San Antonio as I would go to Mass at their Lourdes Grotto and Guadalupe Tepeyac.

Despite my strong Catholic upbringing, I struggled a lot with my faith throughout high school.  I was bullied for being Catholic.  The trauma from the hatred I received, as well as loneliness, left me somewhat resentful towards my Catholic identity.

I began to pull away from my faith a bit, and upon entering college sought a life I thought was “normal” and took part in the traditional college life, even though in my heart I knew it was wrong to do.  My last girlfriend even disliked the Catholic Church and this caused a lot of conflict with my family and me.

All the internal conflict I had with seeking happiness in college life and in vices left me feeling this great emptiness and longing to seek out the Church.  I changed my ways and began to go to Mass every day and pray the rosary daily.  One day I began to feel that call to the priesthood again.

When I felt this overwhelming desire to enter the seminary I reached out to Fr. Ray Cook, O.M.I. who I had known for five years and has been my Spiritual Director.  I realized that I had spent all of high school and the start of college trying to be someone that was not me, and that the reason I felt empty was because I sought happiness in things that were no match for the love of God.

Upon reading the Oblate Rules and Constitution, I found myself moved to tears by the charism, which was the perfect match to what I wanted to do with my life – to serve and evangelize the poor and abandoned.

In 2018 I attended a Come and See vocation weekend with the Oblates.  There I met Fr. Jesse Esqueda, O.M.I. who invited me to visit the Oblates mission in Tijuana, B.C., Mexico.  After that weeklong mission trip I decided to take a semester off from college and do three months of missionary work in Tijuana.

I honestly could not be any happier with my life right now.  If I were to
see the people that hurt me in the past, I would hug them because had they not broken me I would not have found God in that silence and solitude, nor would I be where I am today, a Missionary Oblate seminarian.  Praise be Jesus Christ and Mary Immaculate!