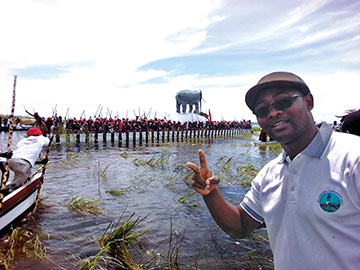 “They sent me to Cameroon, the United States, Italy and Mexico.  I kept going as far away from South Africa as you could go,” jokes Fr. Reagan.  “But it turned out good because now I can speak nine languages.”

Those languages include five Zambian dialects plus English, French, Italian and Spanish.  His proficiency for languages comes in good use as Fr. Reagan recently became the Grants Coordinator for the Oblates in Zambia, serving as the primary link between benefactors from around the world to the Oblates’ Zambian missionary endeavors that they support.

Father Reagan’s Oblate journey began in 2006 when he joined the formation program right out of high school.  He got his first international experience when he was sent to the Oblates’ novitiate in Godfrey, Illinois for a year of prayer and discernment about a calling to religious life.

“It was at the novitiate that I saw snow for the first time.  Then the electric went out for three days and it was so terribly cold.  I was counting down the days when I could get back to Zambia,” said Fr. Reagan.

After making first vows at the conclusion of his novitiate year, Fr. Reagan did go back to Zambia with the full expectation that he would go to South Africa and study at the Oblates’ St. Joseph’s Scholasticate.  But his boss had other plans.

Father Reagan was sent to study in Cameroon, and he wasn’t happy.  The primary language in Cameroon is French and he spoke no French.  There was also the different food and culture that created confusion.

Father Reagan actually wrote a letter back to his superior saying he wanted to come back to Zambia.  But that request was quickly shut down.

“The response back was that if I left Cameroon then I wasn’t a real missionary and probably wasn’t a good fit to become a Missionary Oblate,” said Fr. Reagan.

So Fr. Reagan remained in Cameroon, avoiding what would have been the biggest mistake of his life.  After a few months he had adjusted to his new environment and was extremely happy.  He stayed in Cameroon for four more years.

After Cameroon Fr. Reagan returned to Zambia to await his next assignment as a seminarian.  He knew it had to be South Africa this time.  So of course he was sent to Rome to study at the Oblates’ international scholasticate for three years.

Throw in a few months in Mexico to learn Spanish and Fr. Reagan’s formation for the priesthood took place in four countries and three continents.

Ordained in 2015, Fr. Reagan was first assigned to the Oblates’ missions in Kalabo.  Located in the western portion of Zambia, Kalabo is one of the most difficult places to live.  The people are some of the poorest in all of Africa.  They also have to endure harsh weather and soil that is so poor that almost nothing grows.

Father Reagan said working in the Kalabo mission required a lot of patience.  For example, he once went to an outstation to say Mass which was scheduled to start at 6:00 p.m.  There were only a few kids there at that time so he waited and waited.  Adults didn’t start showing up until around 10:00 p.m. and the Mass didn’t get started until midnight.  The Mass was spirit filled and joyful, well worth the six-hour wait.

Today, as the Grants Coordinator for the entire Oblate congregation in Zambia, Fr. Reagan is responsible for securing funding for a variety of projects to meet the spiritual and physical needs of the people served by the Oblates.

For spiritual needs, funds are being raised to build chapels, parish halls, a small Marian grotto and the continuation of Catholic broadcasting on an Oblate-run radio station.  A long-term goal is to secure funding to build a retreat center that can accommodate about 100 retreatants at a time.

For the physical needs of the poor, funds are being raised to dig wells and a variety of agriculture initiatives including the creation of farming irrigation, poultry farms and fish ponds.

“Our Oblate founder, St. Eugene De Mazenod, told us that we must first treat people as humans and then meet their spiritual needs,” said Fr. Reagan.  “We are putting those words into action here in Zambia.”