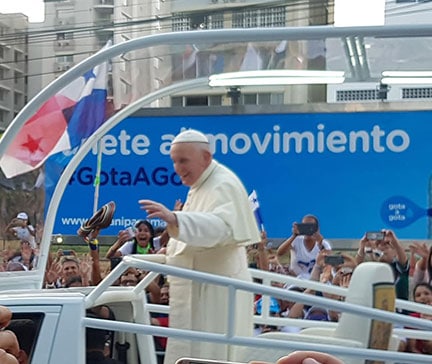 Father Jesse Esqueda, O.M.I. was excited to be able to offer 19 youth of his Tijuana, BC Mexico parish a once-in-a-lifetime opportunity to travel to the 2019 World Youth Day (WYD) in Panama.  The youth were excited too; for a year and a half, they worked hard to raise money for the trip.
The group raised over $20,000 and the money was placed with a Mexican travel agency specializing in travel arrangements for groups heading to World Youth Day.  In addition to the Oblate group, the travel agency was handling travel arrangements for 11 dioceses in Mexico and had collected a grand total of $500,000.
All seemed in order until Fr. Jesse received the shocking news on Monday, January 14 that all the money for the group was gone.  Tragically, they were the victims of an elaborate scam.  They were devastated; their trip was planned for January 19 and there was no way to raise the funds in time.  Or so they thought.
Father Jesse recounted the events on Monday that revealed the scam: “A group from the Diocese of Zacatecas planned to attend the WYD pre-events and was instructed to make a bus ride to Mexico City airport to transport them to Panama.  When they arrived at the airport, they were met with confusion by airport personnel about their promised chartered plane to Panama.  With attempts to contact the company for explanations, calls were unanswered and their contact person was nowhere to be found.  Needless to say, word spread fast to the other 400+ youth that had used the same company.” 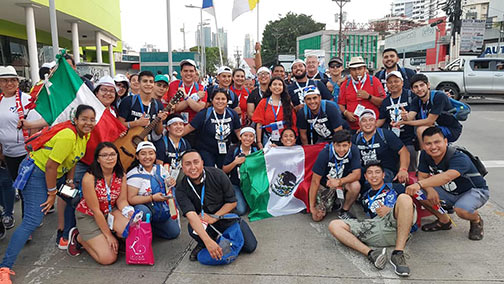 “The youth are devastated with this reality,” Fr. Jesse said. “Our youth worked for over a year to save money to go to Panama.  They sold thousands of tamales, washed hundreds of cars, sold countless raffle tickets and participated in many other fundraising events to raise enough money to pay for their trip.  We don’t know what the next step is at this point.  We paid over $20,000 to the company for arrangements for airfare, ground transportation, lodging, and meals.  The youth were looking forward to this great event and to see Pope Francis.  This was going to be the first trip outside of Mexico for most of the youth from our group.”
The night after the discovery, Fr. Jesse called an emergency meeting to inform the kids.  He said the kids were crying, heartbroken and expressed doubt that they could go.  Some said they gave up hope knowing they wouldn’t be going.
In this seemingly hopeless situation, the Oblates decided to offer a glimmer of hope to the despairing youth.  Bishop Michael Pfeifer, O.M.I., Bishop emeritus of the Diocese of San Angelo, Texas began canvassing his list of contacts.  In addition, Fr. David Uribe, O.M.I., Director of the Oblate Missionary Society (the fundraising arm of the Oblates) asked the Charitable and Planned Giving department to see if they could do anything to help.
The team of fundraisers made a goal to replace the stolen money within three days.  By Wednesday, phone calls by Bp. Pfeifer and Fr. Uribe to Oblate donors began replacing the lost travel funds at a surprisingly fast rate.  The calls continued as the group inched toward the goal.  On January 17, just before noon, a donor pledged the remaining amount.  Within the span of four days, a heartbreaking act of thievery became a story of generosity and love.
Father Jesse was happy to share that he and his group arrived in Panama safely:
“We FINALLY made it to Panama!!  THANK GOD, we were able to buy flight tickets, get lodging and register for the WYD events at the last minute.  However, the only possible journey for us was Tijuana to Mexico City to San Jose, Costa Rica then 19 hours on a bus from Costa Rica to Panama City!  It was a long journey but we were HAPPY TO TAKE IT!
“Words cannot fully express the gratitude we feel for your concern, support and prayers!  This was a TRUE MIRACLE of Love.  Tragedies turn into blessings with FRIENDS LIKE YOU!”
When the youth were asked what advice they would give others preparing for the next World Youth Day, they were quick to offer some profound words of wisdom: “Never give up; overcome money, people and circumstances.”  “Be spiritually prepared through prayer.”  “Live in the moment, always having faith and always be thankful.”