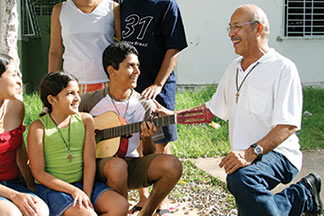 When the Missionary Oblates decided to expand their outreach to a new mission land in Brazil, they turned to an American Oblate who has worked in diverse ministries in Brazil for nearly 50 years.

Father Tony Rendon, O.M.I. was named Pastor at St. Francis of Assisi Parish in the Diocese of Caico in the northeast section of Brazil.  The parish is located on the periphery of Caico and the parish territory is vast, about 9,000 square miles with a population of over 300,000 people.  There is only one other Catholic Church, also run by the Oblates, in the area.

Father Tony was ordained in 1967 and has spent nearly his entire priestly ministry working among the poor of Brazil.  Most of his work has been in the rural northern part of the country where travel by car is difficult or impossible.  Instead, Fr. Tony has spent decades reaching his mission sites by horseback, boat and on foot.

“The thing that bothers me the most is not the mosquitos, heat or poor living conditions,” says Fr. Tony.  “What bothers me is seeing people who claim to be Christian not acting Christian.  That is so wrong.”

At his new assignment at St. Francis of Assisi Parish, Fr. Tony is bringing the Word of God to people who otherwise would have no regular place to worship.  Father Tony is being a Christian, in both word and deed.